Once you reached the highest Dutch Mountain at the point where the German, Belgian and Dutch borders meet you can choose either to go back into Holland or continue right into Belgium. There is no direct road into Germany, here. Are you thirsty? Well, take a trip from here into Belgium, for sure! After crossing the Belgian border at 1o km from Vaals you’ll reach the village of Homburg (Hombourg). Here you find an excellent brewery and you can spend the night at the recently restored former railway station. Admire the courageous attempt to established a Railway Museum over there. In this blog I tell you more about a short 25 km day trip from Maastricht or Vaals, into Belgium from Hombourg along the beer and cheese of the Abbey “Notre Dame du Val-Dieu” and the Sunday’s farmers market in Aubel.

You can spend the night in the former train station. There are also sleeping places in train carriages offering room to up to 32 persons. In the main building is a nice bar and restaurant. It is also possible to rent the complete place to throw a party. The new-fangled owner’s original idea was to start a Railway Museum at the Station of Hombourg when he bought the place including a nice yard with rails. Right now – march 2015 – the station’s buildings and the directly adjacent platforms with wagons are nicely restored and open to the public. 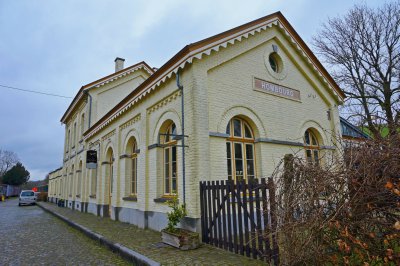 But the restoring job is anything but ready. In the railway yard is a gigantic collection of rusting locomotives. Train carriages covered with sheets of flaking paint and miscellaneous railway gear. All waiting for maintenance. Still lots of work is to be done on this promising railway collection. This enterprise to maintain our industrial heritage can really do with a hand or two.

Hombourg brews its own brand at the brewery “Grain D’orge”. We take our chance! After all it is the first Belgian brewery we encounter as we are at 15 km from the Dutch-Belgian border. Each Saturday at 16.30 hours the brewery organises tours for visitors. There is a taste of beer for everyone.

Belgian Beer and Cheese on the Farmers market of Aubel

The village Aubel is a regional center about 6 km from Hombourg. Here you find a Post Office, supermarkets and a fine collection of hotels. The place is popular as a starting point for well-marked walks and cycling trips through a landscape in which somehow the time stood still. Visit old farms, churches and drink beer and eat cheese at an abbey. On Tuesday and Sunday morning there is a regional market here in the “Pays de Herve”. When we walk over the Sunday farmers market the weather is not really cooperating. Rain is drizzling down and furious winds thrash the market stalls. But still it is fun. Aubel, and the region of Herve, have a good reputation as it comes to beer, cheese, cider, honey, apple and peer sirup. The market provides you with traditionally made products.

Cheese from the Abbey of Val Dieux

The Beer of Abbey of Val-Dieu

The Abbey “Notre Dame du Val-Dieu” – 5 km from Aubel – was founded in 1216 in a uninhabited valley which was so hostile that the local population called it the “valley of the devil”.  The monks renamed it “Valley of God” . The Abbey of Val-Dieu is the only Belgian Abbey that survived the French Revolution.  Nowadays the Abbey is the host to  a devote crowd worshipping god in the monastic Church and celebrating earthly life  with the beer and cheese of the monks. The Abbey’s beer is the result of longitudinal study. For centuries the monks studied the yeasting proces. With this knowledge and the clear water of nearby springs an original Belgian abbey beer is brewed which is rich in vitamins B, minerals and antioxidants.

Where to stay? Go to Hotel Husa de la Couronne  or the Liège Hostel .
Enjoy a couple of days and take the time to taste some Belgium Beer straight from  one of the Abbey’s.

The Abbey of Val Dieu

Beers from the Abbey of Val Dieu