Caves under the Pietersberg in Maastricht

The 127 meters high Pietersberg was our favorite Dutch mountain. But nowadays a stone quarry and a pit with pools of water bear witness of a mountain in decay. With a guide you can visit the 150 km long tunnels underneath the stone quarry. So your effort should not be climbing to the mountaintop but to descend into the tunnels and reach the deepest point underneath the mountain.

The mountain is part of a Altiplano of marlstone. The ambivalent relationship of the Dutch with mountains is well demonstrated as we approach the Sint-Pietersberg. The Dutch cement company ENCI is deconstructing the mountain. The marl mountain provides Holland with the raw materials needed to produce cement. The company excavated the Altiplano at such high-speed that nature conservationists feared that in the future there only remains a hole in the ground. And strolling over the Altiplano around the Pietersberg you will discover ponds where today rare vegetation is discovered by divers. The conservationists stopped the deconstruction of this Dutch mountain and its plateau to “a certain extend at some point in the future”. 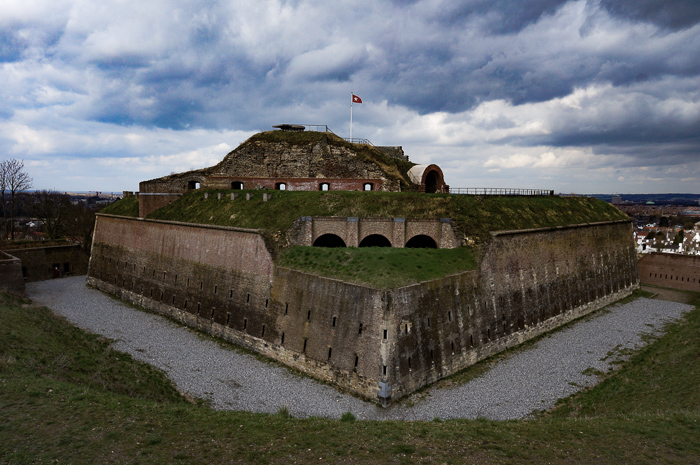 Visit the caves under the Pietersberg. You must see Maastricht.

The remains of an Altiplano of marl which served as a stone pit for centuries are impressive by Dutch standards, though. Underground there is a vast network of thousands of tunnels stretching out over 150 km. So your effort should not be climbing to the mountaintop but you rather descend into the tunnels and reach the deepest point underneath the mountain.

To descend under the Pietersberg you need a guide. You definitely get lost and you would not survive a trip through the tunnels on your own. It is so dark and the silence is so heavy underground that you would lose each sense of direction as soon as the flashlight of your smart phone goes off. So the tunnels are forbidden territory, but almost every day you can book a guided tour down under the Sint-Pietersberg:  T + 31 (0)43 325 21 21. You can book tickets for the daily guided tours in different languages.

The Dutch Mountains each played their specific role in the Second World War.  The Pietersberg was a depository of Art Treasures during the war. Rembrands painting the “Nachtwacht” was stored there. Moreover the underground network of tunnels was an ideal hide-out for the citizens of Maastricht during the war. How many people stayed in the mountain is unknown. Rumours go that there were living so many people in the tunnels that they exploited their own underground bakery. There is no proof for that though. But underground we do find a chapel at a point where 5 tunnels cross.

Cheap accomodation near the caves of Maastricht

In Maastricht you can spend the night on the Maas on a hostel boat. From the boat you walk along the Maasboulevard straight in to the city centre where there are lots of nice things to do. I sure love Maastricht, they say the city is the Amsterdam of the south of Holland.